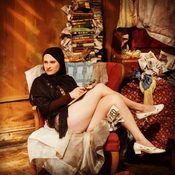 
"Christine Demuth makes a disarming Little Edie. She captures the character's mercurial moods and ever-conflicted feelings about her mother as deftly as she evokes the real Edie's accent and leggy movements. She likewise makes palpable Edie's intense desire to shine on the stage — anywhere, really... Demuth's dynamic singing communicates vividly throughout."

"Christine Demuth plays Little Edie. Her performance is mesmerizing. She plays the young woman with grace, elegance, and lot of sarcasm. Her comedic timing is perfect. Her voice is strong and despite her constant battle with her mother to get into the limelight she makes her presence known. Demuth impressed me in Act 1 but she comes into her own as Little Edie in Act 2 portraying a very eccentric once beautiful socialite, looking back on her fractured self. A truly outstanding performance."

"Mother Darling, in both incarnations, cannot hold a candle to the level of crazy that Christine Demuth brings to Little Edie. Cracked and broken from the off and never truly firing on all cylinders, Demuth portrays Little Edie’s descent into denial and madness like a proper operatic tragedy. Brimming with gusto, panache, and pizzazz when she’s holding all the cards, Demuth wields an emotional torch in her physicality as well as her voice. Watching her sing “The Telegram”, torn asunder and all but emotionally eviscerated is truly harrowing. Demuth’s versatility knows no bounds as she transforms Little Edie entirely for the second act, and watching the penultimate moment where she steps out to the gate of Grey Gardens steals your breath away."

"Last but certainly not least, there’s Christine Demuth who is the absolute highlight of this production. She embodies both a young Little Edie and the iconic older Little Edie from the iconic documentary, all the while, bringing her own interpretation into the character. Not only does she give an outstanding vocal performance, her acting chops are superb. The subtle but definite change in her character from Act I to Act II is seamless and she plays it to the hilt. The real Little Edie had a very distinctive accent (New England, for sure) and Demuth is on point. From the moment she steps onstage until the emotional “Winter in a Summer Town,” she had me hooked. Kudos to Miss Demuth on a stellar performance and I can’t wait to see more from her."

The Missing Peace by Ron Melrose

"A one-person show is demanding, a musical is exhilaratingly exhausting, but a one-person musical requires performance divinity to carry off successfully. Vocal performer and one-woman extraordinaire Christine Demuth is a goddess of the stage... In a stunning combination of vocalization and interactive eyes, the way Demuth visualizes what she is seeing and singing brushes art to vibrant life with a welcoming invite to believe in the mystical fantasy that is happening all around her. Transforming a world of listless rubbish and trinkets into magical artifacts and scenery, Demuth not only paints a living landscape but gives birth to this chimerical world using only her voice, her facial features, and the movement of her body.

Singing for eight different characters, Demuth astounds and amazes the audience with a unique sound for each one that she portrays. There are affectations of timbre and pitch that distinguish Brianna, the story’s heroine, from The Storyteller, and further still from Mother and Rose. Layered techniques create the craggy mountainous sound of the Old Crone for “Childhood’s End” without ever compromising the vocal clarity or integrity of the lyrics. In just blinks and breathes Demuth is able to switch seamlessly from character to character, demonstrated most intently with slicing precision in “The Greening” where she flips between Brianna and the Crone. The emotional spectrum is fully traversed by Demuth’s performance, deftly articulating each emotion as she tumbles through unfathomable oceans of feelings all with jarring vocal clarity and phenomenal consistency.

There is a sense of adventure bursting from Demuth from the moment she steps into Brianna with “The Forgotten Song”, which takes flight on her voice, sails through her expressive eyes, and soars through her emotionally engaged physicality, leaving the audience awestruck with wonder and intrigue. This sense of fearlessness thrills all who listen and keeps the house teetering on the edge of their attention, half desperate to learn how the story concludes, the other half desperate to plunge headlong into the tale itself and take up the flute or sword to restore Brianna’s homeland and aid her on her quest."

"Demuth displays incredible vocal technique, as she established a unique singing voice for each of her characters. Each one is so carefully constructed, that even during moments where a full costume or prop change is technically challenging, all you need is her voice to recognize the character."

"Demuth has a beautiful and versatile voice that seamlessly carries her from character to character, often in the same song, so that the audience never has difficulty knowing who is addressing us at any given moment. From the moment the Storyteller asks to “Borrow Your Breath” to tell her story in the opening number, DeMuth draws the spectatators in close around the campfire… It is glorious.”

"As Wilm​a, Christine Demuth acts with an energetic, rosy glow and a tumbleweed twang."
~The Washington Post

“Christine Demuth makes the most of that lighter side of the plot in her fervent performance as the accordion-toting Wilma. But she also has the expressive subtlety -- her eyes always speak -- to draw out the depth of the girl's anxieties when Wilma learns that property can come attached with that multitude of woes.”
~The Baltimore Sun

“Christine Demuth, as Wilma, paints a vivid portrait to the angst and loneliness of a young girl who desperately misses her mother who “died of a broken heart,” and yet as the years pass she has forgotten the look of her mother’s face – only to be reminded by looking at a photograph found in a dresser drawer. Demuth’s charm in this role is not only in her believability to play a young girl – a quality that she’s got down to a science (She played the adolescent lead in Mary Rose last season) – she makes you care about her without the flash of dramatic antics. Reminding you of your family and friends (faults and all) is where Demuth excels as Wilma, gently capturing the knowing authority of a teenager at a crossroads.”
~DC Metro Theater Arts

“Both Christine Demuth and Kathryn Zoerb easily capture the wonderful innocence of girls poised to become women as well as the heightened sense of expectation present in youth. They are emotional and naive and curious and eager for more. More life. More love. More dreams.”
~DC Theatre Scene

“This production is anchored by Christine Demuth's frail and pale appearance as the lovely and somewhat ethereal title character...”
~Howard County Times

“Miss Demuth visually captures the lightness and quickness of a girl trapped in a bell jar... a restless soul caught between a reality she can barely remember and a spirit realm she can’t forget.”
~DC Theatre Scene

“Christine Demuth did an appealing job as the ever-naive Mary Rose, especially in the scene on ‘the island that likes to be visited.’”
~The Baltimore Sun 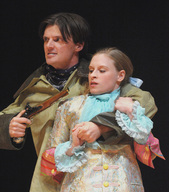 “... interactions with Demuth’s dapper, sassy, foul-mouthed Nell Gwynne are among the production’s most compelling moments.”
~The Washington Post

“Christine Demuth also reappears in three distinct roles. Her comical landlady is given a memorable posture and walking style that is as good as anything in an old Carol Burnett skit.”
~BaltimoreSun.com, Explore Howard

“the sylph-like Ms. Demuth, morphs from a spritely sentinel, surly jailer, and cantankerous maid (with a gait disorder!) to a dashing heroine in breeches.  Watching her and Mr. Williams shuttle from one slamming or creaking door to the next, in the guise of their various characters, is one of the many pleasures of the production, along with the surprises that will pop out at you.”
~Drama Urge

“The opening prologue sets the tone beautifully, with the adorable Christine Demuth challenging the audience to ease the lines of demarcation between either and Or.  Listen carefully to catch the underpinnings of the entire play which argues that one need not, should not, be locked into a closeted binary mindset, that the sky is the limit to explore—this all pronounced in exquisite iambic pentameter by the waifish Demuth in shimmering golden attire... The play by Liz Duffy Adams riffs on the exploits of three actual historical characters and sparkles in the capable hands of three of the finest actors in town.”
~DC Theatre Scene

"Christine Demuth rounds out the cast playing another three characters. She does the most effective scenery-chewing as Nell Gwynne, the celebrated actress of the day who is ready and willing to pursue just about any dalliance."
~The Baltimore Sun

“Christine Demuth was easily the most animated and expressive Laura I’ve ever seen, and in a good way. Too often, she is played as shy, spineless, and bland, fading into the woodwork. Here, she is shy, dreamy, lovely, fragile, amusing, and kind, with an otherworldly sense about her. In fact, her portrayal here is reminiscent of someone with a form of autism … intelligent, but just a bit out of step with the rest of the world. She employs various techniques to give us her spin on Laura, from a very believable physical disability to a unique and stilted vocalization of her lines. It’s a thoroughly engrossing performance... The scene between Laura and Jim is romantic, intimate, and very, very real. The audience held its breath when Jim first held Laura’s precious glass unicorn up to the candlelight, and a deafening silence followed the collective gasp when it broke a few moments later.”
~DC Theatre Scene

“As Laura, the daughter whose limitations involve her timid personality as much as her lame foot, Christine Demuth is so pale and delicate that she always convinces. The candlelit conversation between Laura and Jim is so impressively acted that the theater becomes completely still, as the audience savors this special moment.”
~Howard County Times

“Demuth traces Laura’s journey from beat to beat with masterful precision—one’s heart leaps and falls with hers.”
~BroadwayWorld.com

“As Laura, Demuth's slow movements and dreamy eyes make her seem like a porcelain doll, or one of her precious glass figurines. Even when she awakens in the presence of Jim, Demuth plays it with subtlety: Her eyes widen, her chest quickly rises and falls.”
~Baltimore City Paper 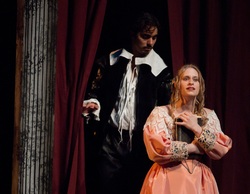 “Equally impressive is Christine Demuth as Ophelia... Ms. Demuth’s a capella song of madness was heart wrenching, performed with the confidence of a powerful voice, yet crackling with an undercurrent of fragility and impending doom.”
~Williamsburg City Guide Examiner 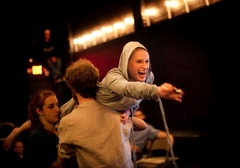 “Christine Demuth... who provided the entire noise effects/mood music with her voice—gamely meets this black box of a theatrical circus with a confident resolve.”
~Baltimore City Paper 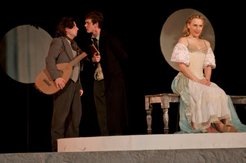 "As the young lovers Bianca and Lucentio, Demuth and Peter Kendall are both vivid characters and as randy as dogs in heat."
~Baltimore City Paper


"Christine Demuth so fully inhabits this wondrous child whose life force is so strong... one of the best productions of the year."
~BroadwayWorld.com 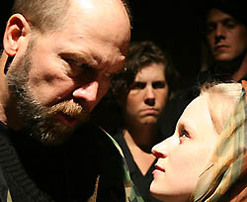 “Christine Demuth, a diminutive young woman, with a gigantic stage presence, is dynamic as Antigone. Ms. Demuth says more with her eyes than her lines, bringing a rich, deeply felt portrayal to the stage. Antigone’s fiery defiance in facing up to Kreon is inspiring and truly brave, and this actress is more than up to the challenge of delivering it... In Act Two, she does not utter a word, but watch her carefully through the upstage windows. She continues to give a heart-wrenching, fully realized performance.”
~BroadwayWorld.com